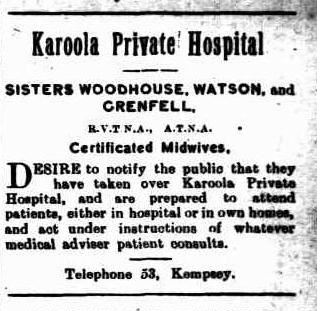 As I draw near to the final stages of my research and writing about the lives and careers of midwives (and nurses), and their private maternity hospitals, I find myself sometimes catching a  glimpse of who they were...I chart their lives on the mid north coast towns where they worked as this is the focus of my study.   But, to understand them a little more and fill in their lives, I also sketch in their beginnings, some family information,  their training, and the many moves they had to make to find work in the years 1890s through to the 1940s.  And I do look at what happened to them when they left the mid north coast as these women were highly mobile and always looking for their next appointment.


I am struck always by their resourcefulness, their willingness to accept change, their strength and their endurance as they sometimes changed places/towns and employment sometimes yearly, always often. One example is Clara Armitage  who was the licensee and resident manager of Kendall Lying In Hospital (a small village near Port Macquarie, NSW) from 1920 to 1926. She then returned to Sydney where she worked in Hurlstone Park (1927), Marrickville (1928), Coogee (1929), Arncliffe (1930-31), and then moved to the country town of Guyra (1932-1937). Clara was single and was 84 when she died a few short years later in1941.  She had been working and delivering babies and caring for women all of her life.


Clara is just one of the 200 women’s stories which will be part of my Historical Biography of these women. But as I attempt to fill in these final pages and write how these women were I do have a sense of them, some idea of who they were,  a glimpse of them in my mind’s eye, so many of them passing but real in that ghostly, fading past. It is so important that they are remembered, these indefatigable women who gave so much to local communities and are still, in many cases, remembered by those communities today.


I will publish my book Women's Business: Midwives on the Mid North Coast of NSW, (a historical biograpy of the Hastigns, Macleay and Armidale regions to 1950)  in 2017. Updates will be posted on my blog and my website at: www.writingfamilyhistory.com.au