Original records usually have much more detailed information, are less likely to have errors, and are more likely to be located in the context of the times. Original cemetery headstones, certificates, probate data and property records will yield information not available elsewhere. For women ancestors such a strategy is especially important as we try to locate names and construct a fuller biography. Finding a photograph or a biography of an individual on the internet is usually only a first step in the research process. Your next step is to locate the original source/s from which the web story or images were drawn and then access these directly. The National Library of Australia, the British Library, Library of Congress, state libraries and archives will have leads to find an original source and you should continue your search here. Inter-library loans, digitised records and online library resources will help you gain access to the documents once you have located the original source. Use birth, death and marriage certificates to map out a woman’s life, and research backwards and forwards across these documents to find more information. 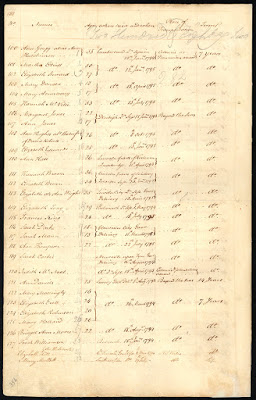 Mary Holland is one of 7 convicts in my family.  She was tried at Surrey in  and sentenced in 1794 with three other women Mary Mattingly, Elizabeth Evett and Elizabeth Robinson.  She was transported to Botany Bay arriving in 1796 on the French-built convict ship the Indispensable. Mary Holland began her life in Sydney in a de facto relationship with a Marine Corp soldier Lachlan Ross.  She had two children and was deserted by Ross in the early 1800s. Mary began another de facto relationship with the convict Joseph Butler and their son Sylvester's daughter married into the Rose family linking Mary Holland to my father's family history.

Writing about Mary Holland   illustrates how the stories of convicts, crime and criminality are vexed and complex things, their stories enmeshed with and mired in the strictures of social class, gender, continuing injustice and grinding poverty. Mary Holland was caught in a time of history when the seething masses of poor in England had to fight, literally, for their bread. That she stole bed clothing most likely from the beds she was then making is ironic and poignant. But that she survived to be a grandmother and perhaps see her children prosper[i] suggests there is a lasting and positive legacy to link us to her long, tough and largely forgotten life.

[i] I have yet to find the exact record of Mary Holland’s death but according to the convict musters she was still alive when aged in her 50s.