Women warriors are not as visible

Women waged their wars from the back row, often quietly and can be overlooked as leaders and shapers of society in the past. Even when married and burdened with children and domestic duties a woman worked outside with her husband on the farm and in the shop. She was a volunteer at her church and in her community. She taught her children and she supported her sisters and female friends. Women may not have occupied public office making them immediately visible in records but they were occupying other roles as volunteers and workers in women’s organisations, at her local church and in the local community. Try to find these and write about them.

One of the biggest problems in writing my great grandmother's  story (Mary Kirkpatrick was a midwife) was finding out more about her.  She was a trained midwife so there were records of that, she advertised in local papers and I could track her there and I researched her childhood etc in Belfast.  But I didn’t know about her as the woman…so I turned to what I call my circle strategy.

Draw a number of circles around your female ancestor and write in these:  family, friends, work, neighbours, local community.  And  begin asking questions:


Look at the her sisters and brothers, she may be a witness to a marriage, she may be a witness to a birth, which will give you an impression of the close relationships in that family. Was she the youngest, the eldest? What kind of social behaviour would have been expected of her? If she did marry other questions come into play around family. What age was she when she married?  Was this the norm at the time? Do you think she used birth control? Why?  Why not? Who delivered her babies?  Was it a neighbour, a midwife, a friend? How do you think she dealt with death, disease, the loss of young children? The loss of family members, friends, a husband?
How did she  travel with small children?
Did she have favourite recipes, are there cookbooks, was she religious…Women like men went through many changes in their lifetime.  They were children, young women, mature adults, married women, had children, grew older and then aged…Many lived to a long old age, map this as fully as you can.
We know even from a common sense point of view that women always had women friends, also she might have sisters, cousins, neighbours, old school friends.  And always one or two close friends  that were very important to her. I know my great grandmother Nurse Mary Kirkpatrick had many friends , many of the women she birthed became lifelong friends, and other midwives in the towns were her friends as well, and she was a long time resident and became well known, my mother told me Mary K  had a lot of friends, and it was certainly true.  And by researching these women I found out so much more about my great grandmother;  about her friendships, work colleagues, partnerships in private hospitals, and participation in community events. 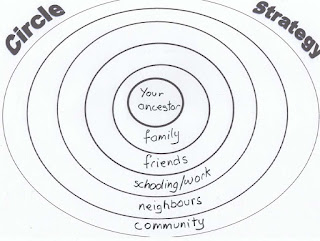